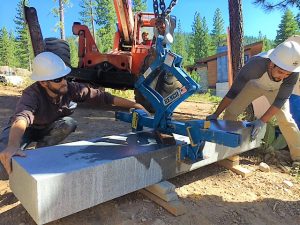 The only way to make a blog about a Kenco Multilift interesting is to be honest and a little, necessarily, self-effacing.

Last year, I landed the biggest project in my career thus far as a Stonesmith with a 7-figure budget.  Due to a lot of weird and surprising constraints I had to get super creative about my approach in order to build on the scale and in the timeline desired by the client while still adhering to the “dry stone” method that I specialize in for all my works.  But, this one had a new twist:  The client wanted a modern, minimalist, mountain theme, which would require large, square and rectangular shaped pieces. 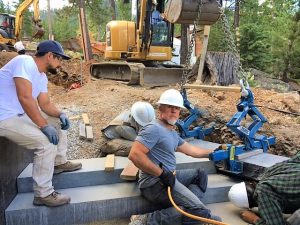 With these parameters in mind, my stone importer (based in Seattle) and I came up with an approach that combined a “Lego-like” building method with the flexibility of a “modular” design.  The stone pieces ranged in weight from 200 to 2,000 pounds.  (Now, keep in mind that most of the stone I’ve used over the years can be moved with a dolly, two men and some rock bars.)  So, I ordered approximately 750,000 pounds of basalt and granite stone and had it shipped over from the quarries in Southern China.  Then, I never thought twice about it because I was also the Project Director and had a hundred other tasks to focus on right away.  In the back of mind I figured I’d just use skidsteer machines, 2×4 wood runners and pipe.  If you look at photos and videos of the project thus far and the size of the stone we are moving around this is really embarrassing considering that my wall planks alone average 810 pounds each.  But, I simply had no schema in my brain for anything like this.

By about the third day of installation I started panicking inside when I realized I’d not done my due diligence with planning and figuring how we were going to efficiently move hundreds of tons of stone around on a very, very tight schedule.  A couple of the guys started drilling 2 holes in each 6′ long, 810 pound wall plank, inserted eye bolts and lifted them with straps.  It worked!  My first impression was that this would be the answer and I was happy.  Certainly, a lot faster than pushing these pieces around with rock bars.  Then, I did some calculations based on how many wall planks we were actually installing each day with this method and I panicked again.

The owner of the landscape design company that was collaborating with me on this project suggested I look into buying a lifting device he found online and he showed me a photo of Kenco’s Multilift.  Once I looked at this, I realized a miracle was about to happen.  I called Jessica at Kenco that same day and ordered two of them.   We were all honestly blown away by how these lifting devices worked and how much stone they could hold and lift.  We’ve been using them every day now for nearly 2-1/2 months.  We’ve attached them to excavators and sky tracks.  We’ve lifted pieces ranging from 200 to 1,400 pounds with both smooth and rough faces.

Today, if I start thinking about what we would have done (or not done) had we not discovered Kenco’s Multilifts, I feel nauseous inside.  Along with some different compression driven vacuum lifters we purchased, Kenco’s Multilifts are such a game-changer for us now that we already see new possibilities for future stone projects where we can scale up the weight, size and shape of the stone we use. 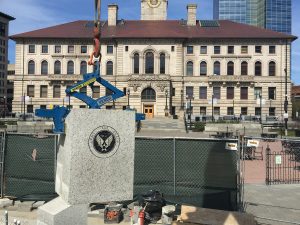 We used the ML3k clamp to move and set granite from a WWII memorial in Worcester Massachusetts. This is one of the most versatile lifters I have ever used. Hands down the right tool for the job. 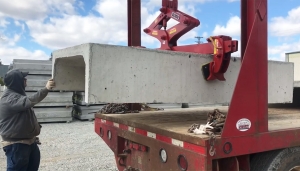 I am a plant manager at a concrete Precast facility and we have recently starting using your lifting products for moving our concrete casts with our hydraulic boom trucks and overhead cranes. Not only is it safer than our previous solutions but it’s also quick and efficient. Thanks again for the great product! 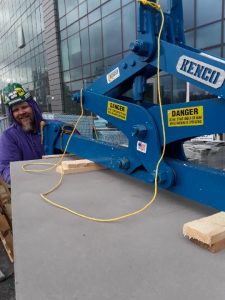 We are a group of roofers from Boston local 33. We were tasked to install 2000 to 3000 lb concrete slabs on the roof of a new building project. At first we struggled with crane straps, which was a slow process and set us back a good deal of time. Our employer purchased the Kenco Multilift for us, and it made the job a hell of a lot easier. Thank you very much and keep innovating. 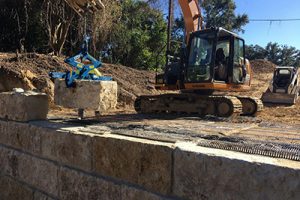 Setup was very easy. Before, we tried moving the blocks using other methods. The Multilift has saved us time and labor expenses. We would be behind schedule without it. 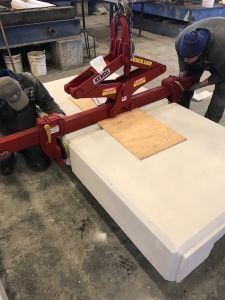 Prior to using the Kenco Multilift, Landscape Forms were trying to work with chains and straps. After using the Multilift to move the forms, they “are sad that (the lifter) has to go with our concrete blocks to the contractor’s jobsite because they enjoyed using it.”