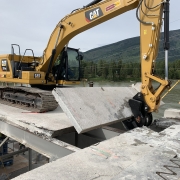 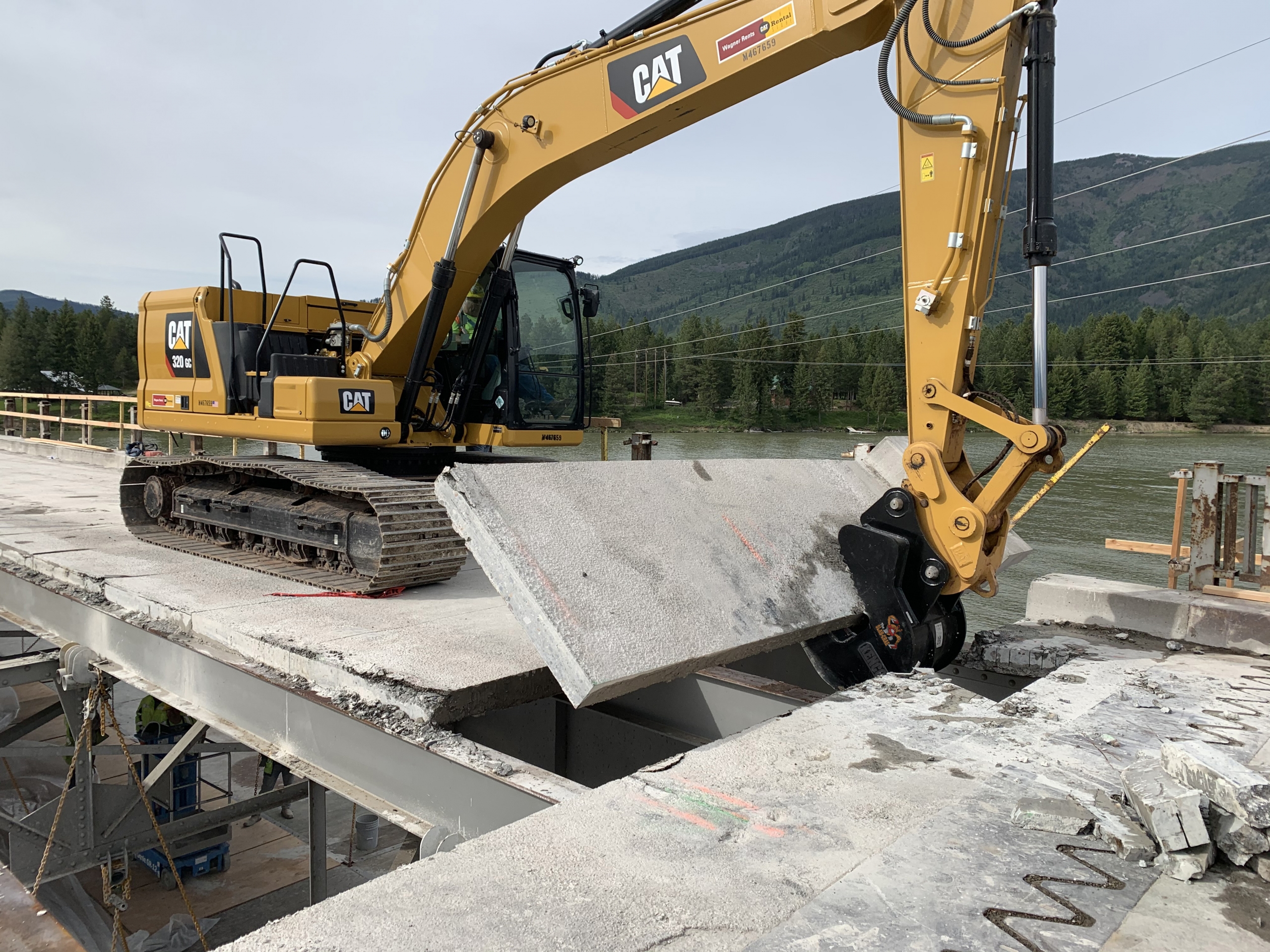 “My name is Julian and I’m an engineer for Kiewit Infrastructure. We recently purchased two of the EX200 Class 36” Slab Crabs, and used them to remove the superstructure of a 920’ long bridge in Trout Creek, Montana. The Slab Crab bucket allowed us to pull slabs of concrete off of the bridge quickly and efficiently, without excessive rubble and debris falling below the bridge deck. Great Product!” 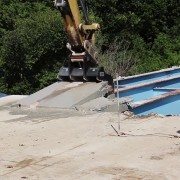 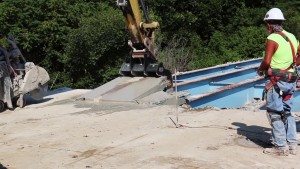 I am a Foreman for Walsh Construction. We have 2 of your Slab Crabs we are using to remove 131,000 feet of bridge deck. The quality of your product has been extremely helpful. Like anything new, I wasn’t sure if it would be able to hold up to the task at hand. However, when I got the Slab Crab bucket to start our first demo, I couldn’t believe the quality and strength it had! With the quick interchangeable bucket, it was easy to go from hammer to bucket. I am very pleased how easy it could hold a slab secure in its teeth. Safety is very important to our company and I feel very comfortable around your product. From 1 to 10 (10 being the best) my rating is a thumbs up 10! 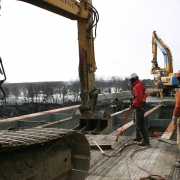 The original Lewiston-Queenston suspension bridge was built in 1851 and 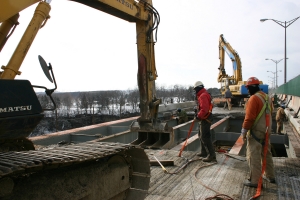 provided passage over the Niagara River between the United States and Canadian borders. This bridge was destroyed in 1857 when high winds caused the center section to collapse. It was not rebuilt until 1899. The second suspension bridge stood for over 60 years. In 1962, the Lewiston-Queenston Bridge replaced the suspension bridge. This arch bridge was built at a cost of $16,000,000. It is a four lane divided structure with a pedestrian sidewalk that allowed both foot and vehicular traffic between the United States and Canada. Its span stretches 1600 feet between abutments and hovers 370 feet above the Niagara River. In 2004, plans were implemented to replace the existing surface with a fifth lane by eliminating the pedestrian access route and middle barrier wall.

Since this bridge is a link between the borders of Canada and the United States, an international team effort was formed between Rankin Construction (CA) and Oak Grove Construction (U.S.). The project began in mid-December 2004. What had been forecasted as a two-year project was to be completed by November 15, 2005. The first step in removing the existing surface would set the pace for the remainder of the project. Cooperation between the two companies was essential. They would both begin at the center of the bridge, signifying the border between the nations. Each would remove the slabs, working towards their respective riverbanks. It was imperative that the bridge remained balanced, so both companies would need to stay evenly within 42 feet of the bay. The steel structure was not to be damaged. Additionally, debris could not be dropped into the river. Representatives of the two companies met to discuss ways to meet these objectives. They ended up hashing out the details over a cup of coffee.

In order for the work to proceed smoothly, progress on both sides needed to occur at a similar pace. Oak Grove Construction had been using the Kenco Slab Crab for about 10 years. It provided them a fast, easy way to remove concrete slabs. According to Bob Spengler, Oak Grove Construction superintendent, “The Slab Crab is safer and much less labor intensive than other methods of removing slabs. Debris isn’t much of a factor, because the slabs can be removed intact.” Based off their suggestions, Rankin Construction also purchased a Kenco Slab Crab to use for this project. First, the seven-inch thick concrete was saw-cut into manageable pieces of about 6 feet by 10 feet. (This resulted in over 350 slabs per side.) Rankin Construction mounted their Slab Crab on a John Deere 330, while Oak Grove Construction utilized a Komatsu 300. Both machines were up to the task. The teeth of the Slab Crab were slipped under the slab and the bond was broken. Each individual piece was tipped back to secure the load and lifted from the deck. The slab was then loaded onto a waiting truck. This process was repeated at a rate of about six slabs per hour on both sides of the border. By using this technique, the cooperative effort between the United States and Canada was accomplished in just eight days. 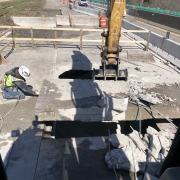 This project consisted of 7 bridges and removing approximately 1400 slabs. 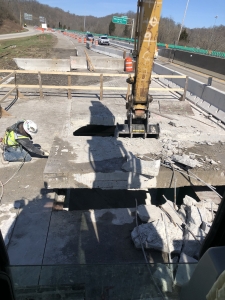 The Slab Crab worked great. We handled slabs ranging from 4’9” in width and 12’ long 13” thick. The U-shape in the back of the bucket works great for prying slabs that hadn’t been cut all the way thru. Also, the way it handled the large slabs was great. Once the slab was seated in the bucket, it didn’t move, slip or wobble. This also helped drastically in the production aspect. I was able to just grab the slab and keep things moving.

Really appreciate the great product.  I wouldn’t want any other attachment for bridge demo. 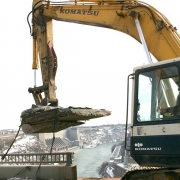 The Slab Crab is safer and much less labor intensive than other methods of removing slabs. 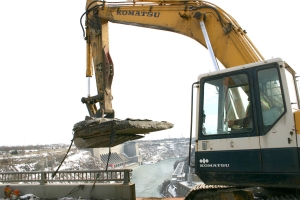 Debris isn’t much of a factor because the slabs can be removed intact. 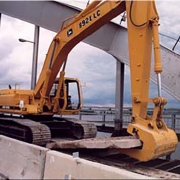 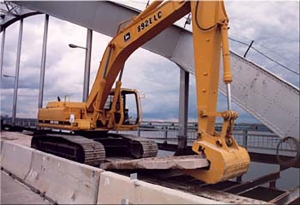 The Southwest Virginia Memorial Bridge over the New River and the Norfolk Southern Railroad tracks is located on Route 11 in Pulaski County. In April of 2001, the Virginia Department of Transportation began work to replace the 52-year old Southwest Virginia Memorial Bridge, a vital link between the city of Radford and Fairlawn. The old bridge was a single structure with two lanes for northbound and southbound traffic. The new bridge was being constructed with two structures, each containing three lanes, and having pedestrian sidewalks and bike lanes. Fairfield Skanska, of Fishersville, Va, was contracted to replace the bridge. 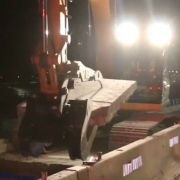 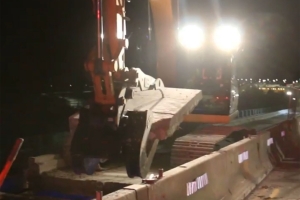 between Canada and the United States. The Kenco Slab Crab has allowed us to remove about fifty 5′ x 6′ deck slabs during each night shift operation. 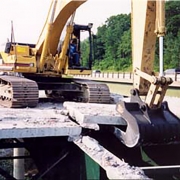 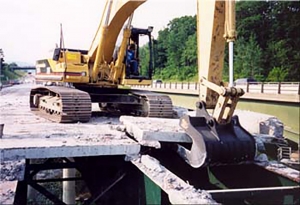 We use the Slab Crab 2 –3 times a week to assist with repair of city sidewalk and damaged driveways. The traditional method of a jackhammer was time consuming. It has allowed us to demolish concrete without hiring another crew. The Slab Crab allows you to increase your production time without increasing cost.

The purchase of the Slab Crab was undoubtedly one of our best purchases. In fact, we purchased another Slab Crab for a mini excavator. Our Slab Crabs are used everyday. One of the reasons they are used so often is because of their construction. They are built tough… and so simple….no bearings, no nuts, no bolts, no screws, no grease fittings. Zero maintenance. After removing over 100,000 square feet of concrete, only the paint is scratched. We use the attachments mainly to remove sidewalk for wheelchair ramp construction. Our firm recently constructed over 1500 ramps, and all the removal was done with preciseness by the Slab Crabs.

We are very pleased with our purchase of the Slab Crab. At times we use it everyday. It works great on sidewalks and driveways. Removing bridge decks is now a one-man job compared to a 2 to 3 man job. The Slab Crab gives me an advantage over the other contractors.

We use the Slab Crab 3 to 4 times a year removing bridge decks. Many bridge removals are made over water or wetlands that cannot have concrete dropped in them. We saw the decks and remove the concrete with the Slab Crab Bucket. Most of the time we are able to give the slabs to a landowner. Previously we demolished decks with a wrecking ball, cut the rebar with torches, hauled the rebar off to a scrap yard and then had concrete to dispose of. The Slab Crab greatly reduces labor and disposal costs.

It took us only 6 hours to do what previously took 3 days (using the Slab Crab).